It has been a privilege and an honour to be part of the e-drive initiative in Jamaica - training vehicle technicians on electric and hybrid vehicle technology, maintenance and hazard management.

15 technicians are now qualified to IMI Level 3 standard and will be leading the charge as a further 200 technicians and 200 first responders are trained and educated on this technology - all part of the drive to electrify the vehicle fleet in Jamaica over the coming years. 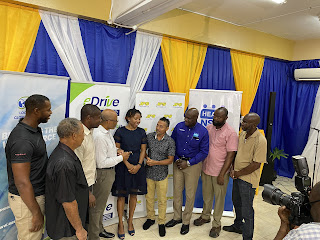 Jamaica is a beautiful country, once out of the city centre or tourist hot spot you are met with a lush, tropical countryside that is largely unspoilt, and some of the beaches need to be seen to be believed - they are stunning with the Caribbean Sea lapping at the shore.

The people are also extremely welcoming and largely very friendly - there is an image of Jamaica being a hot spot for crime, and yes there is a risk of trouble particularly if you are in the wrong area or out at night - but this is little different to other parts of the world, and if you take sensible precautions then you will stay safe.

Driving standards, and the quality of the roads, is generally appalling - I am never going to complain about driving standards or road quality in the UK again (that statement may change on the drive home from Gatwick!) traffic lights just change colour - most taxi drivers and motorcyclists seem to ignore them - overtaking traffic queues, jumping in front of other drivers, tailgating and changing your mind at the last second are normal practices - and if the horn on the vehicle ever failed then this would make the vehicle completely un-driveable - the Jamaicans live with a finger always on the horn button and everywhere you are the sound of vehicle horn is a constant! I saw many vehicles with broken lamps, dented panels and missing bumpers, I was quite surprised not to see many accidents considering how they drive and how busy the roads are in Kingston.

The roads are generally of very poor quality, lots of potholes big enough to damage wheels, tyres and suspension are the norm, poor quality road surfaces and very little drainage so in wet weather there is standing water in many places.

The vehicles on the road are also interesting, lots of Japanese brands are present and many vehicles are Japanese imports (all RHD models) with some of the weird and wonderful models that the Japanese love - one of the most common is the Toyota Probox - a small five door station wagon (estate) type vehicle that is favoured by the many taxi drivers - and more often to be seen with 5 or 6 passengers spread out across the two rows of seats.

There are some prestige models, saw a variety of Mercedes, BMW, Land Rover/Range Rovers, many pick-up trucks and a good presence from Hyundai/Kia, but very little else other than Toyota, Honda, Nissan, Mazda and Subaru.

One surprise was seeing previously UK registered vehicles on the island, these were very obvious because the UK number plates were still on the vehicle and covered over with Jamaican registration plates. 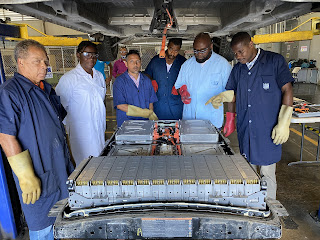 There are some electric and hybrid vehicles around, mainly Toyota models but did see two Nissan Leaf and a BYD full EV - numbers of electric vehicles are currently very low but the ambition of the project I was involved with is to increase these significantly year on year.

Brand new electric vehicles are very costly, so many will come into the country as second hand imports (as many of their current vehicles do now), and one question was raised about the shipment of these vehicles from other countries and the time this takes - sometimes two or three months at sea.

The vehicle manufacturers have plenty of experience shipping brand new electric vehicles around the world, but how do we safely ship previously used vehicles and not damage the battery by leaving it unused too long?

In summary, Jamaica may be late to the party on electric vehicles but they are catching up fast and using the knowledge that China, the EU and North America have developed over the last 24 years to make certain they adapt quickly for this new technology. There are some challenges though, including:

Some of these issues need intervention from the Jamaican authorities; as an industry we can help with:

Thanks must go to Heart NSTA Trust, Green Solutions International, IDB Labs and JPS Foundation in Jamaica and Eintac in the UK - without all of these this project would not have been possible. 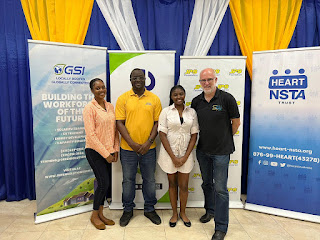 EINTAC  - Use discount code ES10 for 10% discount off all orders